My first introduction to Linux was Momonga Linux which I naively bought in a place near my house (Yeah, people does sell Linux in Mexico) as soon as I knew about the existence of Linux, that was when I was in junior high school, I was just 12 years old.

After that I began my life as what many know as a "Distro Hopper", trying as many Linux distros as I could but none of them ever made me stay. It was 3 years later, in high school that I discovered Joli OS. It amazed me at the time and still does, I couldn't believe there was a way to connect a HTML5 with Linux running on the back. Joli OS was in fact the first distro that made me use it without the need of dual booting, it was completely fine for me to have it as my main and only OS, I recommended it to a bunch of my friends and in fact I even got to see one person in a coffee shop using it once (Believe me, seeing that in Mexico is extremely rare). Everything was just fine and then... it got discontinued, just like that the OS that I loved so much was over, I had arrived late to the party and just got to witness the end of it.

Joli OS holds a special space in my mind and in my heart, not only because it was the first distro that truly made me use Linux in a daily basis but also because it was the one who thought me a lot about it, as good as it was it wasn't perfect, it was based on an old kernel and system and there where some little issues which over time I learned to fix and with that information I created my first post ever. Back then my blog was a blogspot one so the date of that post currently is not the same it was, but that post I made was some months before it got discontinued. Besides troubleshooting, it made me learn all the basics of Ubuntu, Linux and even made me very intrigued by the web I hadn't think about it before but it may have been because of it that I became so interested in building things for the web.

At that time, having something that merged the web and operating systems like that was completely new, there was no Chrome OS and in fact I believe it was Jolicloud the first one to create a system like that or at least create it successfully. When the interface got updated in it's 1.2 version (which was the last one btw) I just loved it a lot more, it looked so modern and clean, completely different to your regular Linux distro (yeah, there was no elementary OS either) and for my extremely minimalist taste it was perfect. It was pretty unexpected for everyone that after this major UI change they would discontinue the OS in order to become a web app. Most of the comments they received in their blog post about the end of life of Joli OS where the same, nobody wanted it to die and if you ever used Joli OS you probably didn't want that either. They ended its life stating the following:

Today to access the full potential of Jolicloud, you just need to use our apps on a browser. That’s why Joli OS has been discontinued and is no longer officially supported.

I refuse to believe that they truly believed that, the thing with Joli OS was not because of the web app, it was all about two world coming together. Sure, it was possible and easier to just follow as a web app, and let's admit it, supporting an OS is a complicated task, in fact that's also one of their reasons, they simply couldn't keep up with the rate new hardware was coming and supporting all that was just insane, I'm not saying they did a bad thing or took the wrong choice, I'm fully aware that for a startup trying to create an OS is a pretty complicated task and I'm sure that they have been able to focus all their efforts and manpower into creating amazing things, things that would probably have taken a lot longer to build if the OS was still around.

For a moment there was a last hope, they started building a desktop environment for Ubuntu, it was like the reborn of Joli OS but sadly it didn't lasted much, once again it proved to be just too much work to take on.

That in fact proves that they understood what the OS meant to everyone, I'm sure it meant a lot for them too but that decision must have been one very well thought and I truly hope it worked as they expected.

Every once in a while I mention Joli OS in a tweet or G+ post, in fact I even had a +1 in one of them by Zak, from the Tech Support of Jolicloud. It's funny because all of my interactions with Jolicloud have been responded by him, even when I had some problems with the desktop environment he was the one who responded my support request and he's the one I've seen that's always dealing with blog posts and news about Jolicloud. 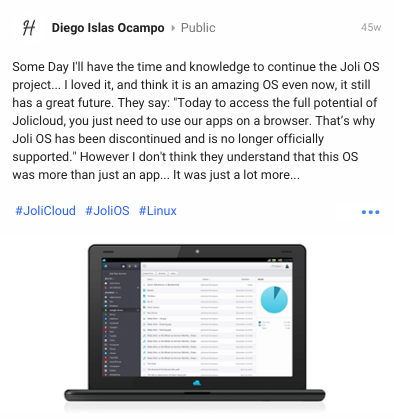 It was that post, and I must say, what I stated there is in fact one of the items of my to-do list, I love Linux and in fact I'm thinking on getting my System Administrator certifications as soon as I have time, I'm sure that bringing back Joli OS is not impossible, I must admit that right now I don't have any deep knowledge worth something for that task, I've even tried to review some of the code in GitHub with no other result than knowing I'm not ready yet, not that I expected to be ready but I know it will be a long way.

I still haven't understand why no one has taken up that task already, the code is there and yet no one forked it and continued it, even though it was loved by so many, there was no one around to keep it going. It may be because it's too integrated to Jolicloud, even though it was open source it still is pure Jolicloud material, in fact I don't even know if it would be legal to try and bring it back just like that, I suppose you would need to talk to them since at the end, you are integrating their platform into an OS and well, integrating it means you know how it works and everything about it, or at least have an API. With that in mind it's then not that difficult to see why no one has done it yet but even so I would love to try.

As I said before, currently I don't have any deep knowledge on how to do that or even how to create a Linux distro for starters but I'm patient enough and a quick learner, trying will not hurt me.

Don't get me wrong, I know there are alternatives, I actually literally have the "jolios alternatives" search once every two months or so and I've seen the alternatives that are out there but again, none of them is as well implemented as Joli OS was, at least not for my liking. I own a Chromebook, let's say that's the closest I've got to having the same experience but Chrome OS at the end is not a full Linux experience, and yeah, I've got crouton with Ubuntu on it but it's still not enough. I'm a person with very specific likings, Elementary OS has been one of the other only distros that I consider beautiful, I also own a Mac, I'm not an apple fanboy but let's face it, the interface is simple, beautiful and they have lots of awesome apps, not many Linux distros have that. I use Ubuntu but I really hate the default ambiance theme, switching to Numix is the first thing I do after a fresh install. Joli OS was fine out of the box, even though it's discontinued I do recommend people to try it once, just for a peek, a peek to one of the most amazing things I've ever seen.

I've even dreamed with owning a Jolibook (Yeah, those are not in production any more), that's definitely something I want to get someday, I'm sure I'll find one for sale somewhere, just have to wait for it, I would really give my Chromebook away for a Jolibook, I'm not an apple fanboy but a google fanboy that's questionable so yeah, it is still something I would choose instead of a Chromebook. In fact I'll try someday to install Joli OS on my Chromebook, as they say, fake it till you make it.

Now, returning to the issue about reviving Joli OS while being external to Jolicloud, I would even consider applying for a job there, if you know about me, you'll know I want to build something of my own but I do want to work somewhere just for the experience of it, there are not many companies in my list but Jolicloud is definitively one of them, I've been learning a lot of web development and every time I struggle with an API I just think "Damn, how the hell do the guys in Jolicloud do all of that", I really mean it, they are like API gurus and working there must really be awesome. I only use Google Drive for cloud storage so I haven't been able to use Jolicloud's drive to it's full extend but having it integrated with the OS again would really change that, it not only managed your cloud storage but the local one as well, everything was simple and beautiful.

So there it is, the reason I'll never give up on Joli OS, I don't know of what will happen in the future but I'm sure that I'll at least try to make it work again, it's too good to be lost.